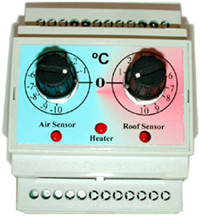 The thermostat operates on the plus-minus system where two thermostats connected together to switch on the heat at weather conditions when icicles formed.

The heat are switched on when there is a risk of freezing with considerations to measured temperature on the shady north wall and the melting temperature of the roof due to solar heat or heat through the release of the roof insulation.

”Roof sensor” is mounted in a protective pipe on the roof where the highest temperature is expected and allows a connection of the heat when the temperature rises above the preset value (0 – + 10°C).

Connect the thermostat according to the electric schedule. If you use screened sensors, terminal block 1 can be used to connect these against an external earth wire.

To correct the location of the sensor can the temperature knobs be corrected according to following:

Observere: The power consumption increases med adjustment of the knob closer to 0°C