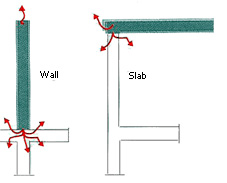 The building process is subject to tight schedules. The time of form stripping, for example, is already decided at the design stage, often without taken into consideration the influence of temperatures on the hardening time.

For economic reasons, the time available for form stripping is short and stripping must be completed on schedule, in order that no unnecessary delays should occur.

Wall and column forms are normally removed the day after concreting, in practise, after 15-20 hours. In the case of load-bearing structures, the formwork is not removed until after a day or so or after about a week, depending on the type of building and type of formwork etc.

The factor that determines the time when the form is to be stripped is the strength of the concrete – not its age. In order for the concrete to become strong enough to allow the formwork to be stripped, within the scheduled time, extra measures are often required, such as the use of concrete with an accelerated increase in strength, additional heating or insulation.

When casting concrete during the winter period, it will always be necessary to be able to determine its maturation, in order to:

Hardening of concrete – a question of temperature

A simple and reliable method to keep a high concrete temperature even during cold periods and as a result get quick hardening and early form stripping, is to supply heat by using heating cables.

As a rule, it will be necessary to cover the concrete in order that no part of it should be damaged by frost due to early freezing. Freezing of new concrete causes hardening to stop and results in loss of strength. If freezing occurs too early it may even cause the collapse of a concrete construction.